To celebrate the fifth anniversary of one of our favourite UK vegan establishments, we exchanged a few emails with Rudy of Vx , London’s original one stop vegan boutique full of the tastiest foods and coolest apparel, to find out about their 5 years of business and what they have planned for the future! If you’re ever in London, check them out!

So what was the inspiration to open Vx?
I originally started with producing merchandise under the name of Secret Society Of Vegans (circa 2003-2004) and it came to the point where I was shipping t-shirts all over the world to vegan shops (U.S., Canada, Germany) but nothing to the UK. I couldn’t find a shop in the UK that would sell the sort of stuff I was producing.
The UK has a ton of health food stores, some of them are entirely vegan but there was zero chance for a t-shirt with a skull on it to be sold in a hippie health food store haha.
In the hardcore punk scene, there’s this thing called DIY (do it yourself). You can’t wait for someone else to do it for you. So, I did it. I opened my own shop so I could carry my clothing brand.
And like the SSOV stuff, I wanted to create an alternative to the bland and boring vegan stuff you see everywhere.
This month you’re celebrating your 5th year, how has the business changed in those 5 years?
It feels like 25 years. Those five years are a blur. A lot of mistakes were made but a lot of lessons were learnt. Vx has been through some radical changes. I wish I could have a time machine to talk to myself and get it right from the start!
You stock so many great products, what has been the best discovery that you couldn’t wait to get on the shelves?
Some people don’t know but without us, nobody would have known of Vegusto cheese. We were the first people importing it in the UK. The name spread all over the UK because of us, and that made them decide to open an office in the UK. One of my biggest accomplishment was when I managed to convince David (owner of Fieldroast, Seattle – USA) to let us have a pallet of Fieldroast products. We are now importing Daiya cheese, Tofurky, Follow Your Heart.
The stuff we import from Germany always amazes me. They know how to make vegan cheese over there. First time I tried the Wilmersburger Cheese range, I fell in love.
First time I got a hold of Vego chocolate bars, it was something.
What’s the weirdest thing anyone has ever come in and requested/strangest reaction to the shop?
So many stories I could tell but this could get me in trouble haha…
Who has been the most interesting person to walk into the shop? Any celebrities or people who have travelled far to see you?
This is going to freak you out but once, Darius from Pop Idol walked in our shop by accident. We asked him if he was the Darius and he said yes and ran away.
Less exciting and famous people include: Grammy Award singer songwriter K.D. Lang, legendary photographer Glen E. Friedman, Jona Weinhofen (from the band I Killed The Prom Queen), Oli (singer of Bring Me The Horizon), JME (UK Grime artist), Benjamin Zephaniah (writer and poet), Justin Pearson and the band Retox, Michael Legge (comedian), Andrew O’Neill (comedian)…
We get visitors from all over the world. I’m not kidding. Brazil, Japan, Poland, France, Italy, North America, Sweden, Germany… we are a tourist destination for vegans visiting London.
What have you got planned for your next five years!?
I would like to open another Vx somewhere in the UK. Let’s see! 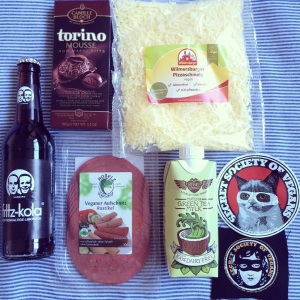 Happy birthday to Vx from us here at Forked Tongues! Be sure to check them out here!
http://www.vegancross.com
http://www.facebook.com/vxshop